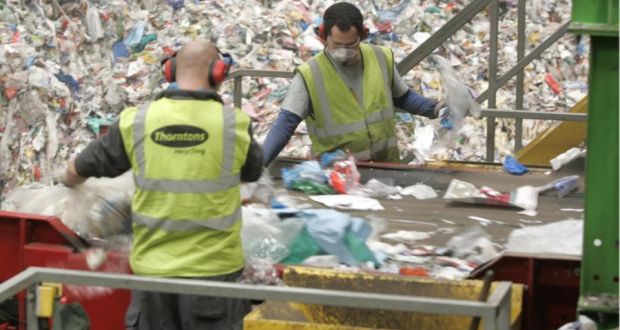 Contaminants, or those dirty, rotten scoundrels, are what happens when non-recyclable items are mixed with recyclables. Innocent papers smeared with food or grease, paper towels, paper plates, napkins, the dreaded Styrofoam … these are just some of the reasons that tons of recyclables are rejected each year.

There’s a general rule of thumb we use to help those who are not sure if something is recyclable or not recyclable: When in Doubt, Throw it Out.

Contaminants pick up by season too. In the spring there will be garden hoses and plant containers. During the holidays, there will be broken Christmas lights and foil wrapping paper. So let’s take a look at the top three most common contaminants found in recycling today. Keep in mind that every community is different and some accept things curbside where others do not, so check with your municipality for a current list of what can be recycled. For the most part, here are the top 3 Material Recovery Facilities do not like:

Plastic Grocery Bags.  Number one thing MRF’s pull out during hand sorting. These bags can muck up the machinery and close it down. Grocery Bags can be taken back to your local grocer to be disposed of properly.

Speaking of plastic grocery bags: do NOT put recyclables in them and then in to your cart. These would be automatically pulled and sent to a landfill. Workers should never open plastic bags to sort through recycling due to safety reasons.

Take Out Pizza Boxes. Some municipalities will allow these to be picked up curbside if you take the insert out and throw it away, but the truth of the matter is that a take out pizza box can ruin an entire batch of slurry. The delicious cheese that we love on our pizzas is greasy. That grease permeates the cardboard. Cardboard is mixed with water and squeeze pressed to make new paper and that grease will cause holes in paper. It’s really that simple. Oil and water do not mix and the MRF will generally pull pizza boxes out during hand sorting.

Styrofoam. Expanded polystyrene, more commonly known as Styrofoam, is problematic to recycle. The problem is the weight. The exact reason that makes Styrofoam so attractive to be used in packaging is the same reason it is difficult to recycle. Profits from recycling are calculated per pound. With material so lightweight, it takes more money to cover the cost of transportation, handling and processing. To process it so that it is cost efficient requires costly equipment. So, while it can be recycled, it isn’t accepted curbside because it is not cost efficient to do so. Your best bet is to try and avoid Styrofoam when possible.

Don’t forget to ENTER TO WIN in the Gift Card Drawings this month! Publix/Kroger, Subway, Target and more! Drawing will be held Thursday, September 28th and you’ll be notified by email if you’ve won. Good luck!